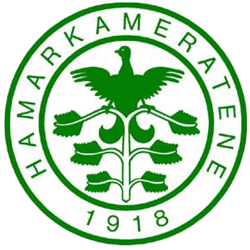 Hamarkameratene (literally the Hamar Comrades), often abbreviated to HamKam or Ham-Kam, is a Norwegian football club based in the town of Hamar. The club was founded in 1918, originally under the name Freidig.

Briskeby gressbane has been the home ground of Hamarkameratene since 1936. The construction of a completely modernized stadium began in 2007. Upon completion, expected in 2009, Briskeby will have a capacity of 10.200 spectators, whereas the capacity prior to the modernization was approximately 8000.

Briskeby Arena, previously known as Briskeby gressbane, is an all-seater football stadium located at Briskebyen in Hamar, Norway. It is home to the Norwegian First Division side Hamarkameratene (Ham-Kam) and is owned by Hamar Municipality. The venue has artificial turf, three stands and a capacity for 8,068 spectators. It was used for the 1938 Norwegian Football Cup Final—which saw the venue's record 14,500 spectators—and has also hosted five Norway national under-21 football team matches between 1984 and 2011.

Construction started in 1934 and the venue opened on 28 June 1936 as the first home venue for Briskebyen FL. The club merged with Hamar AIL in 1946 to form Ham-Kam. The new club has played since 1970 played 22 seasons in the top tier, having been relegated eight times, most recently in 2008. Ham-Kam's record home attendance is 11,500, dating from a 1976 match against Lillestrøm. In 1984, the club house was rebuilt with luxury boxes and a new 2,400-seat East Stand was built. The investments lead the club into financial distress, and in 1993 the municipality had to purchase the venue to save the club. Planning of a new or upgraded venue started in 2001, construction started in 2007 and the first stage was completed the following year. It cost 111 million Norwegian krone (NOK), having suffered large cost overruns.