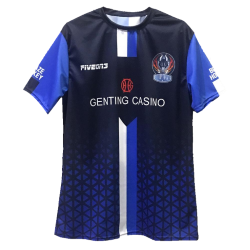 Coventry Blaze are an ice hockey team based in Coventry, England. They currently compete in the British Elite Ice Hockey League (EIHL).

Former Coaches for the Blaze include Paul Thompson, who also coached the Great Britain men's national ice hockey team while Coach of the Blaze. Thompson stood down as coach in 2013 and former player Mathias Soderstrom took over but was replaced in 2014 by Sheffield Steelers Assistant Coach Marc Le Febvre. Le Febvre was then replaced by first Steven Goertzen in a short term role in November 2014, and then a month later replaced by Chuck Weber who agreed to coach until the end of the season. Weber subsequently signed for a further season.

Each season the club releases a new set of jerseys. The club always where their blue jerseys for home games, this will consist of a royal blue for the main color along with a dark blue and white sections on the jersey. The away jersey will have the same base design but this jersey will be white for the main color and the royal blue replacing the white sections on the home jersey and the dark blue sections remain the same. The challenge cup jersey is worn only during the teams home challenge cup games, these jerseys have the same design as the other two jerseys but the main color is now a light grey with the dark blue and royal blue sections from the away jersey remaining. The Coventry Skydome is a 3,000-seat multi-purpose arena in Coventry, England.

Ice Skating
The arena hosts classes from the International School of Skating.

Professional Wrestling
The arena hosted several large professional wrestling shows not long after its opening, and established itself on the British wrestling circuit. In 2005, the venue hosted a WWE event, and a couple of years later hosted TNA Wrestling and Pro Wrestling Noah events in 2008, with TNA returning to the venue as part of its Maximum Impact tour in 2010. The venue also hosted What Culture Pro-Wrestling in 2017. WWE would return to the venue in 2019 with its NXT UK brand.