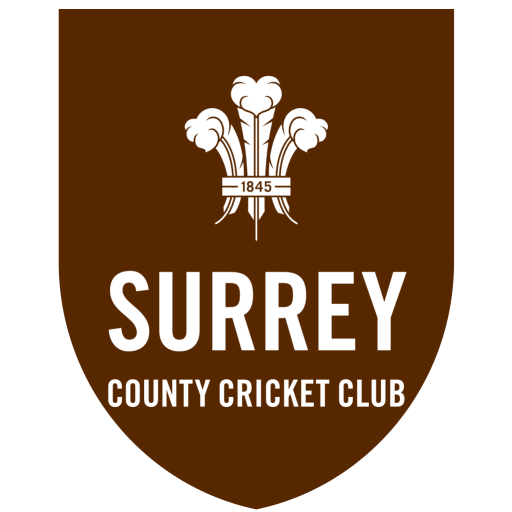 Surrey County Cricket Club is one of eighteen first-class county clubs within the domestic cricket structure of England and Wales. It represents the historic county of Surrey. The club's limited overs team is called "Surrey" (unlike other counties' teams it has no official nickname). Surrey teams formed from 1709 by earlier organisations always had senior status and so the county club is rated accordingly from inception: i.e., classified by substantial sources as holding important match status from 1845 to 1894; classified as an official first-class team from 1895 by Marylebone Cricket Club (MCC) and the County Championship clubs; classified as a List A team since the beginning of limited overs cricket in 1963; and classified as a senior Twenty20 team since 2003.

Home of the club since its foundation in 1845 has been the Oval (currently known officially as the 'Kia Oval' following a sponsorship deal with the Kia Motors company), in the Kennington area of Lambeth in south London. The club also has an 'out ground' at Woodbridge Road, Guildford, where some home games are played each season.

Surrey CCC has had three notable periods of great success in its history. The club was unofficially proclaimed as "Champion County" seven times during the 1850s; it won the title eight times from 1887 to 1895 (including the first ever officially constituted County Championship in 1890); and seven consecutive outright titles from 1952 to 1958 inclusive following a shared title (with Lancashire) in 1950. In 1955, Surrey won 23 of its 28 county matches, a record that still stands and can no longer be bettered as counties have played fewer than 23 matches each season since 1993. To date, Surrey has won the official County Championship 18 times outright, more than any other county with the exception of Yorkshire.

The Oval, currently known for sponsorship reasons as the Kia Oval, is an international cricket ground in Kennington, in the London Borough of Lambeth, South London. The Oval has been the home ground of Surrey County Cricket Club since it was opened in 1845. It was the first ground in England to host international Test cricket in September 1880. The final Test match of the English season is traditionally played there.

In addition to cricket, The Oval has hosted a number of other historically significant sporting events. In 1870, it staged England's first international football match, versus Scotland. It hosted the first FA Cup final in 1872, as well as those between 1874 and 1892. In 1876, it held both the England v Wales and England v Scotland rugby international matches, and in 1877, rugby's first Varsity match.

In 1844, Kennington Oval was a market garden owned by the Duchy of Cornwall. The Duchy was willing to lease the land for the purpose of a cricket ground, and on 10 March 1845 the first lease, which the club later assumed, was issued to a Mr. William Houghton (then president of the progenitor Montpelier Cricket Club) by the Otter Trustees who held the land from the Duchy "to convert it into a subscription cricket ground", for 31 years at a rent of £120 per annum plus taxes amounting to £20. The original contract for turfing The Oval cost £300; the 10,000 grass turfs came from Tooting Common and were laid in the Spring of 1845 allowing for the first cricket match to be played in May 1845. Hence, Surrey County Cricket Club (SCCC) was established in 1845.

The popularity of the ground was immediate and the strength of the SCCC grew. On 3 May 1875 the club acquired the remainder of the leasehold for a further term of 31 years from the Otter Trustees for the sum of £2,800.

In 1868, 20,000 spectators gathered at The Oval for the first game of the 1868 Aboriginal cricket tour of England, the first tour of England by any foreign side. Thanks to C.W. Alcock, the Secretary of Surrey from 1872 to 1907, the first Test match in England was played at The Oval in 1880 between England and Australia. The Oval, thereby, became the second ground to stage a Test, after Melbourne Cricket Ground (MCG). In 1882, Australia won the Test by seven runs within two days. The Sporting Times printed a mocking obituary notice for English cricket, which led to the creation of the Ashes trophy, which is still contested whenever England plays Australia. The first Test double century was scored at The Oval in 1884 by Australia's Billy Murdoch.

Surrey's ground is noted as having the first artificial lighting at a sports arena, in the form of gas-lamps, dating to 1889. The current pavilion was completed in time for the 1898 season.


Cricket, WG Grace, 1891– Kennington Oval
The Oval is referenced by the poet Philip Larkin in his poem about the First World War, "MCMXIV". During World War II, The Oval was requisitioned. Initially, it housed searchlights. It was then turned into a prisoner-of-war camp, which was intended to hold enemy parachutists. However, since they never came, the Oval was never used for this purpose.

The first One Day International match at this venue was played on 7 September 1973 between England and West Indies. It hosted matches of the 1975, 1979, 1983, and 1999 World Cups. It also hosted five of the fifteen matches in the 2004 ICC Champions Trophy, including the final. The Oval once held the record for the largest playing area of any Test venue in the world. That record has since been surpassed by Gaddafi Stadium in Pakistan, although The Oval remains the largest in Great Britain.

Billionaire Paul Getty, who had a great affinity for cricket and was at one time SCCC President, built a replica of The Oval on his Wormsley Park estate.

The famous gasholders just outside the ground were built around 1853. With the gasholders now disused, there has been much speculation as to whether they should be demolished; however, many believe they are an integral part of The Oval's landscape and, therefore, their future looks secure.

It was on 20 August 2006 at this ground that for the first time a team forfeited a test match. Pakistan were upset after Darrell Hair docked them five runs and changed the ball after claiming they had tampered with it on the fourth day of the final Test at The Oval. Pakistan debated the matter at tea and refused to come out for the final session. By the time they decided to resume, the umpires had called time and awarded the game to England.