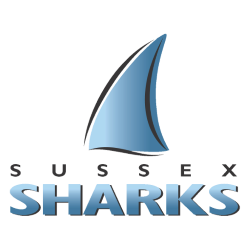 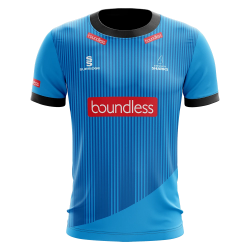 Sussex County Cricket Club is the oldest of eighteen first-class county clubs within the domestic cricket structure of England and Wales. It represents the historic county of Sussex. Its limited overs team is called the Sussex Sharks. The club was founded as a successor to the various Sussex county cricket teams, including the old Brighton Cricket Club, which had been representative of the county of Sussex as a whole since the 1720s. These teams always had senior status and so the county club is rated accordingly from inception: i.e., classified by substantial sources as holding important match status from 1839 to 1894; classified as an official first-class team from 1895 by Marylebone Cricket Club (MCC) and the County Championship clubs; classified as a List A team since the beginning of limited overs cricket in 1963; and classified as a senior Twenty20 team since 2003.

The club colours are traditionally blue and white and the shirt sponsors are Palmer and Harvey for all LV County Championship and Royal London One-Day Cup matches and Jointing Technologies for NatWest Blast T20 matches. Its home ground is the County Cricket Ground, Hove. Sussex also play matches around the county at Arundel, Eastbourne and Horsham.

Sussex won its first ever official County Championship title in 2003 and subsequently became the dominant team of the decade, repeating the success in 2006 and 2007. In 2006 Sussex achieved "the double", beating Lancashire to clinch the C&G Trophy, before winning the County Championship following an emphatic victory against Nottinghamshire at Trent Bridge, in which Sussex defeated their hosts by an innings and 245 runs. Sussex then won the title for the third time in five years in 2007, when in a nail-biting finale on the last day of the season, Sussex defeated Worcestershire early in the day and then had to wait until past five o'clock as title rivals Lancashire narrowly failed to beat Surrey – prompting relieved celebrations at the County Cricket Ground, Hove. Sussex enjoyed further limited overs success with consecutive Pro40 wins in 2008 and 2009 as well as beating Somerset at Edgbaston to lift the 2009 Twenty20 Cup. The south coast county ended the decade having won ten trophies in ten years. The County Cricket Ground, also known as the 1st Central County Ground for sponsorship reasons, is a cricket venue in Hove, East Sussex, England. The County Ground is the home of Sussex County Cricket Club, where most Sussex home matches since 1872 have been played, although many other grounds in Sussex have been used. Sussex CCC continue to play some of their games away from The County Ground, at either Arundel Castle and Horsham. It is one of the few county grounds to have deckchairs for spectators, in the Sussex CCC colours of blue and white, and was the first cricket ground to install permanent floodlights, for Day/night cricket matches (and the second ground after Edgbaston) to host a day/night match in England, in 1997.

In 1872, George "Farmer" Bennett became the first batsman in first-class cricket to be given out handled ball during a match between Kent and Sussex at the County Ground. In 1873, Sussex bowled Worcestershire out for 19 at Hove. In 1884–85, the public raised £4,400 towards the purchase of the ground, with the Earl of Sheffield contributing an additional £600. In the 20th century, the ground was used for some other cricket matches, such as a charity match in 1927 between the "Jockeys" and the "Racing Press", in aid of the Royal Sussex County Hospital and the Royal Alexandra Hospital for children, and an annual match between local commercial travellers and grocers, nicknamed "Travellers v. Grocers"; in 1925, the match was won by the Travellers by 1 run.

The ground has hosted one men's One Day International; the match was part of the 1999 Cricket World Cup, and was a Group A match between South Africa and India, which South Africa won by 4 wickets. The County Ground has also hosted 2 Test matches in The Women's Ashes in 1987 and 2005; in addition, the ground hosted two One Day Internationals in the 2013 Women's Ashes, and in August 2015, is scheduled to host a Twenty20 International as part of the 2015 Women's Ashes. As of July 2015, 5 Women's ODIs and 3 Women's T20Is have been hosted at the ground.

In 2003, The County Ground was the venue where Sussex won their first County Championship title. In that match, Sussex batsman Murray Goodwin also scored 335*, which was then highest score by a Sussex player in first-class cricket. The ground also saw Sussex win their third Championship title in 2007.