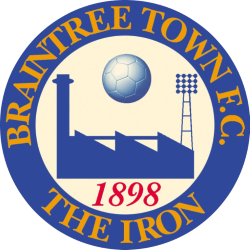 Braintree Town Football Club is a semi-professional football club based in Braintree, Essex, England. They are currently members of the National League South, the sixth tier of English football, and play at Cressing Road. The club was formed in 1898 as Manor Works, the works team of the Crittall Window Company, from which they gained their nickname Iron.

After being founded, Manor Works initially played at the Fair Field, now the site of the town hall, library and bus station. They moved to Spaldings Meadow in Panfield Lane in 1903. In 1923 the club moved to a new ground on Cressing Road which had been built by their parent company. Due to problems with the pitch in 1975, the club were forced to play matches at several other venues, including Heybridge Swifts' Scraley Road (a single match on 26 April arranged at such short notice that many fans arrived at Cressing Road for the match and only 50 attended the game), Braintree Rugby Club's Tabor Avenue (at the start of the 1975–76 season) and the Courtaulds Sports Ground in Church Street in Bocking (a single match against Gorleston on 6 September 1975 with a crowd of 73).