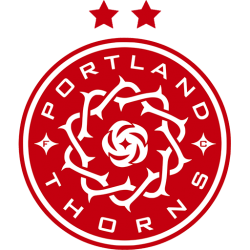 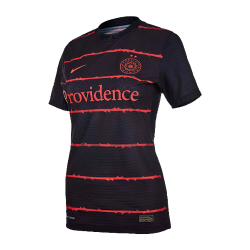 The Portland Thorns FC is an American professional women's soccer team based in Portland, Oregon. Established in 2012, the team began play in 2013 in the then-eight-team National Women's Soccer League (NWSL), which receives support from the United States Soccer Federation (USSF), the Canadian Soccer Association (CSA), and formerly the Mexican Football Federation (FMF). The Portland franchise is owned by Peregrine Sports LLC, which also owns the Portland Timbers. The Thorns, the Houston Dash, the Orlando Pride, and the Utah Royals are other NWSL teams with Major League Soccer affiliations.

In its inaugural season, the Portland Thorns FC placed third during the regular season and, in the playoffs, won the first ever NWSL championship. The club won the NWSL Shield in 2016 and a second NWSL Championship in 2017. Providence Park (formerly Jeld-Wen Field; PGE Park; Civic Stadium; originally Multnomah Stadium; and from 1893 until the stadium was built, Multnomah Field) is an outdoor sports venue in the northwest United States, located in the Goose Hollow neighborhood of Portland, Oregon. It has existed in rudimentary form since 1893, and as a complete stadium since 1926.

The MLS Portland Timbers and NWSL Portland Thorns FC soccer teams use the facility as their home pitch, as do the PDL's Timbers U23s. The NCAA Division I FCS Portland State Vikings football team uses the park during the Big Sky season. The stadium has been host to several major sporting events including Soccer Bowl '77, the 1999 and 2003 FIFA Women's World Cups, the 2009 Triple-A All-Star Game, the 2013 CONCACAF Gold Cup, the 2014 MLS All-Star Game and the 2015 NWSL Championship Game. The stadium capacity of 21,144 is currently being expanded by approximately 4,000 seats, with renovation expected to be finished in late May or early June 2019.

Originally, the park was owned by the Multnomah Athletic Club and used by their amateur sports teams. In the 1950s, the PCL Portland Beavers baseball team moved out of Vaughn Street Park into what was then known as "Multnomah Stadium." In 1966, the city purchased the stadium and renamed it "Civic Stadium." It was renovated in 2001 to accommodate the Beavers, who had not played at the park since the early 1990s. The naming rights of the stadium were purchased by Portland General Electric and it was renamed "PGE Park." In 2010, the park underwent renovations again, this time so it could accommodate the Portland Timbers MLS franchise and a year later the rights to the stadiums name were sold, this time to Jeld-Wen. In 2014, the name was changed again to "Providence Park" after Providence Health & Services bought the naming rights. The stadium sits on a rectangular block bounded by Southwest Morrison Street, Southwest 18th Avenue, the Multnomah Athletic Club building and Southwest Salmon Street, and Southwest 20th Avenue.