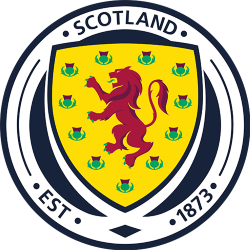 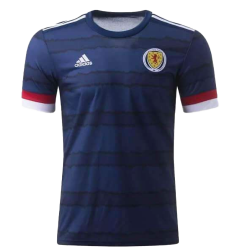 The Scotland national football team represents Scotland in men's international football and is controlled by the Scottish Football Association. It competes in the three major professional tournaments, the FIFA World Cup, UEFA Nations League and the UEFA European Championship. Scotland, as a country of the United Kingdom, is not a member of the International Olympic Committee and therefore the national team does not compete in the Olympic Games. The majority of Scotland's home matches are played at the national stadium, Hampden Park.

Scotland have qualified for the FIFA World Cup on eight occasions and the UEFA European Championship twice, but have never progressed beyond the first group stage of a finals tournament. The last major tournament they qualified for was the 1998 World Cup. The team have achieved some noteworthy results, such as beating the 1966 FIFA World Cup winners England 3–2 at Wembley Stadium in 1967. Archie Gemmill scored what has been described as one of the greatest World Cup goals ever in a 3–2 win during the 1978 World Cup against the Netherlands, who reached the final of the tournament. In their qualifying group for UEFA Euro 2008, Scotland defeated 2006 World Cup runners-up France 1–0 in both fixtures.

Hampden Park (often referred to as Hampden) is a football stadium in the Mount Florida area of Glasgow, Scotland. The 51,866-capacity venue serves as the national stadium of football in Scotland. It is the normal home venue of the Scotland national football team and amateur Scottish league club Queen's Park F.C. and regularly hosts the latter stages of the Scottish Cup and Scottish League Cup competitions. It is also used for music concerts and other sporting events, such as when it was reconfigured as an athletics stadium for the 2014 Commonwealth Games.

There were two 19th century stadia called Hampden Park, built on different sites. A stadium on the present site was first opened on 31 October 1903. Hampden was the biggest stadium in the world when it was opened, with a capacity in excess of 100,000. This was increased further between 1927 and 1937, reaching a peak of 150,000. The record attendance of 149,415, for a Scotland v England match in 1937, is the European record for an international football match. Tighter safety regulations meant that the capacity was reduced to 81,000 in 1977. The stadium has been fully renovated since then, with the most recent work being completed in 1999.