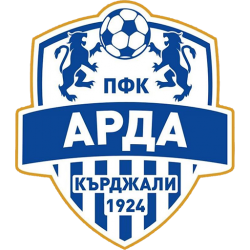 PFC Arda 1924 Kardzhali (Bulgarian: ПФК Арда Кърджали) is a Bulgarian association football club based in Kardzhali, which currently competes in the First League, the top tier of the Bulgarian football league system.

It was founded on 13 October 1924, as an association football branch of a larger sports society in the town. The club was reestablished in 2015, after its former entity was dissolved.

Named after the Arda river, a tributary of the Maritsa, Arda's home ground is the Arena Arda in Kardzhali, which has a capacity of 15,000 spectators. For the majority of its existence, the club regularly participated in the Second League, with its highest-ever ranking is a second-place finish during the 1955–56 Bulgarian Second League. Arda have also reached the quarter-finals of the Bulgarian Cup once, it happened during the 1959–60 season of the competition.

In 2018–19, Arda won the Second League promotion play-off against Septemvri Sofia, resulting in the club's first-ever appearance in the Bulgarian top division.

Arena Arda is a football stadium in Kardzhali, Bulgaria and the home ground of Arda Kardzhali. The stadium was officially opened in 1963 and renovated in 2018.