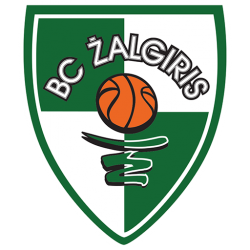 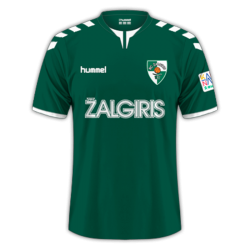 Futbolo klubas Kauno Žalgiris (English: Football club Kauno Žalgiris) is a professional football club based in Kaunas, Lithuania, that competes in the A lyga, the top tier of Lithuania. The club was founded as FM Spyris Kaunas in 2004, became the football section of basketball club Žalgiris Kaunas and moved to their current stadium, the Darius and Girėnas Stadium, in 2015. After their debut season in the A Lyga, the club adopted the name FK Kauno Žalgiris in 2016.

S. Darius and S. Girėnas stadium (Lithuanian: S.Dariaus ir S.Girėno stadionas) is a multi-use stadium in the Ąžuolynas park in Žaliakalnis district of Kaunas, Lithuania, that is now being reconstructed. The all-seater stadium will hold 15,315 people. In 1998 the stadium was renovated according to UEFA regulations, and in 2005 it was modernised with the installation of the biggest stadium television screen in the Baltic states. The latest renovation started in 2018. It will be the biggest stadium in the Baltic states. It hosts Lithuanian football matches as well as international athletics championships. During a sporting season about 50 events are held here.