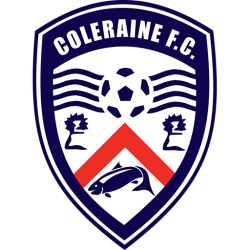 Coleraine Football Club is a Northern Irish semi-professional football club, playing in the NIFL Premiership. The club, founded in 1927, hails from Coleraine, County Londonderry and plays its home matches at The Showgrounds. Club colours are blue and white. The club won the Irish League title once (in 1973–74) and the Irish Cup on six occasions, most recently in 2017–18. They are also the only Irish League club to have won two successive all-Ireland competitions, lifting the Blaxnit Cup in 1969 and 1970. The club is bitter rivals with Ballymena United with their matches being known as the "North West Derby".

The Showgrounds is a football stadium in Coleraine, County Londonderry, Northern Ireland. It is the home ground of Coleraine F.C.. The stadium holds 13,132, but is currently restricted to 2,496 under safety legislation.

Between September 1971 and October 1972, Derry City F.C. were forced to use the stadium as their home-ground after the Irish Football Association banned the use of their ground in Derry, the Brandywell, due to security fears emanating from the Trouble and civil unrest in the nearby Bogside area. Derry's use ended in 1972 when, faced with dwindling crowds, travelling to Coleraine to play home-games was no longer financially sustainable.