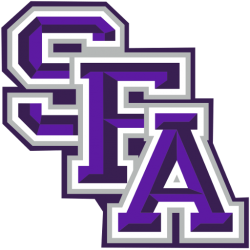 The Stephen F. Austin Lumberjacks basketball team is the men's basketball team that represents Stephen F. Austin State University (popularly abbreviated as SFA) in Nacogdoches, Texas, United States. (All SFA women's teams are known as Ladyjacks.) The school's team currently competes in the Southland Conference. In the 2013–2014 season the men's basketball team had its most successful year so far by going 32–3 in the regular season and 18–0 in conference play. They won 29 games in a row including the conference semi-final and finals and the second round of the NCAA Tournament. SFA repeated the same feat in their 2015– 2016 season by going 18–0 in conference and reaching the second round of the NCAA once again.

William R. Johnson Coliseum is a 7,203-seat multi-purpose arena in Nacogdoches, Texas. Located at the corner of University Drive and East College Street, it is home to the Stephen F. Austin State University Lumberjacks basketball team and the Ladyjacks basketball team. Built in 1974, the coliseum seats 7,203. Two NCAA Women's Midwest Regional games have been played at the Coliseum, as well as a men's NIT game. During summer 2006, a new video board and ad panel were installed. The Coliseum was named after President William R. Johnson who retired from SFA on July 15, 1990 after 14 years of service. The Ladyjacks volleyball team played in the Coliseum until 2011 when they moved to the Robert H. Shelton Gymnasium.