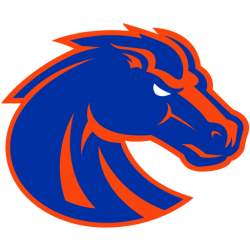 The Boise State Broncos are the intercollegiate athletic teams that represent Boise State University, located in Boise, Idaho. The Broncos compete at the National Collegiate Athletic Association (NCAA) Division I level as a member of the Mountain West Conference (MWC). The Broncos have a successful athletic program overall, winning the WAC commissioner's cup for the 2005–06 and 2009–10 years. Boise State joined the MWC on July 1, 2011

ExtraMile Arena (formerly BSU Pavilion from 1982 to 2004 and Taco Bell Arena from 2004 to 2019) is a multi-purpose indoor arena in the western United States, on the campus of Boise State University in Boise, Idaho. The arena is located on the east end of campus, between West Campus Lane and César Chávez Circle, immediately northwest of Albertsons Stadium.
It is home to the Broncos basketball, wrestling, and gymnastics teams, with a current seating capacity of 12,644 for basketball.