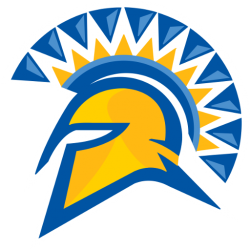 The San Jose State Spartans men's basketball team represents San José State University in NCAA Division I college basketball as a member of the Mountain West Conference.
The SJSU men's basketball team played its first recorded game in 1909. The team has won 10 conference championships, appeared in the NCAA Tournament three times, appeared once in the National Invitation Tournament (NIT), and once in the College Basketball Invitational (CBI).
From the 1930s to 1976, the team played home games at the on-campus Spartan Gym. Starting in 1961, the team also played home games at the off-campus San Jose Civic Auditorium. From 1976 to 1979, Independence High School hosted home games, as the Civic was being remodeled. The team resumed play at the Civic Auditorium beginning in the 1979–80 season. In 1989, the on-campus Event Center became the primary home for San Jose State basketball.

The Provident Credit Union Event Center, formerly and more commonly known as the Event Center Arena, is a complex consisting of an indoor arena and a fitness club on the main campus of San Jose State University in downtown San Jose, California. The Event Center was built in 1989 for the purpose of supporting and providing entertainment as well as recreational opportunities for the student body and university community. The facility is home to the San Jose State Spartans men's and women's basketball teams, which both compete in the Mountain West Conference.