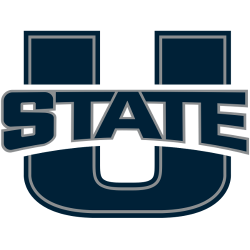 The Utah State Aggies are a Division I men's college basketball team that plays in the Mountain West Conference, representing Utah State University. In the 17 years that former coach Stew Morrill was at the helm, Utah State had the 4th highest winning percentage in the nation at home, behind only Duke, Kansas, and Gonzaga. As of the end of the 2018-2019 season, the Aggies have an all-time record of 1,604 wins and 1,119 losses.
The first basketball team on Utah State's campus was organized in 1902 and consisted of only women. A men's team was organized in 1904, at which point the women's club fell into obscurity.
The Aggies enjoyed mixed success early in their history, notching sporadic NCAA tournament appearances

Smith Spectrum is a 10,270-seat multi-purpose arena in the western United States, located on the campus of Utah State University in Logan, Utah. It is best known for being the home of the Utah State Aggies men's basketball team and the women's basketball team. It also hosts gymnastics, volleyball, and other sporting events.