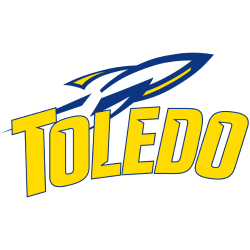 The Toledo Rockets men's basketball team represents the University of Toledo in Toledo, Ohio, United States. The school's team currently competes in the Mid-American Conference. The team last played in the NCAA Division I Men's Basketball Tournament in 1980. Their current head coach is Tod Kowalczyk.
The Rockets have appeared in four NCAA Tournaments. Their combined record is 1–4.

Savage Arena (formerly John F. Savage Hall and Centennial Hall) is a multi-purpose arena located in Toledo, Ohio, on the campus of the University of Toledo.
The arena opened in 1976 and originally seated 9,000 for basketball and up to 10,000 for concerts. As part of a $30 million renovation and addition to the arena, completed in 2008, the seating capacity was reduced to 7,300 for basketball and up to 8,300 for concerts. It primarily serves as the home venue for the Toledo Rockets men's and women's basketball teams and women's volleyball team, and also hosts concerts, commencement exercises, and other events.