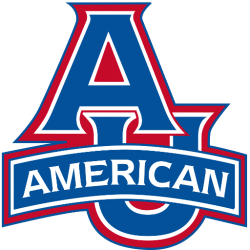 The American Eagles men's basketball team represents American University in Washington, D.C. in NCAA Division I competition. The school's team competes in the Patriot League and play their home games in Bender Arena. Their rivals include Boston University, Bucknell University, and Navy.
The Eagles have appeared in the NCAA Division I Tournament three times. Their combined record is 0–3.

Bender Arena is a 4,500-seat multi-purpose arena in Washington, D.C.. The arena opened in 1988. It is home to the American University Eagles basketball, volleyball and wrestling teams.
The arena, named for Washington, D.C. philanthropists, Howard and Sondra Bender, is also the primary campus venue for concerts, commencement and speakers, seating up to 6,000.