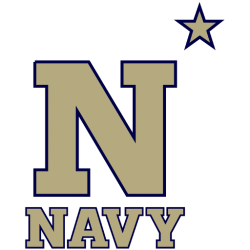 The Navy Midshipmen men's basketball team represents the United States Naval Academy, in Annapolis, Maryland, in NCAA Division I college basketball. The team competes in the Patriot League and plays its home games in Alumni Hall.
The U.S. Naval Academy began varsity intercollegiate competition in men's basketball in the 1907–08 season. Navy was retroactively recognized as the pre-NCAA Tournament national champion for the 1912–13 and 1918–19 seasons by the Premo-Porretta Power Poll and for the 1912–13 season by the Helms Athletic Foundation.

Alumni Hall is an indoor stadium at the United States Naval Academy, in Annapolis in the U.S. state of Maryland. Completed in 1991, it seats 5,710 and serves as the primary assembly hall for the Brigade of Midshipmen. It is used for athletic contests including basketball and wrestling and is home for the Naval Academy women's and men's basketball teams, members of the Patriot League. Additionally, it is adaptable for lectures, assemblies, theatrical productions, concerts and official ceremonies and is home for the Bob Hope Center for the Performing Arts. It also plays host to numerous dinners and receptions through two first-class dining facilities. It also serves as an alternate location for Naval Academy graduation ceremonies when Navy-Marine Corps Memorial Stadium cannot be used due to inclement weather.