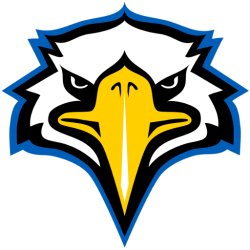 The Morehead State Eagles are the intercollegiate athletic teams representing Morehead State University (MSU), located in Morehead, Kentucky, United States. The Eagles athletic program is a member of the Ohio Valley Conference (OVC) and competes at the NCAA Division I level including the Football Championship Subdivision. The MSU teams are the Eagles, the eagle mascot is named Beaker, and the school colors are blue and gold.

Ellis T. Johnson Arena is a 6,500-seat multi-purpose arena in Morehead, Kentucky, United States. Located in the Academic-Athletic Center on the campus of Morehead State University, it is the home to the Morehead State Eagles men's and women's basketball teams and Elliott County High School boys Basketball team. Construction began in 1978, and the building opened in 1981. The Eagles won their inaugural game in the building on Dec. 3, 1981, over the University of Charleston. Johnson Arena can be easily transformed into an auditorium for concerts and commencements. At the east end of the playing floor, a hydraulic stage can be raised for events.