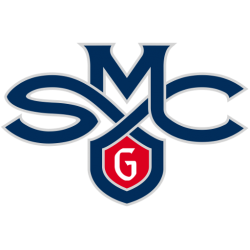 University Credit Union Pavilion (formerly McKeon Pavilion) is a 3,500-seat multi-purpose arena at Saint Mary's College of California in Moraga, California. Home men's and women's basketball and volleyball games are held in the gymnasium, the team nickname being the Gaels. Many athletic camps for youths also use the gym, primarily in the summer, and other on-campus events, such as the Baccalaureate mass, are also held there. Banners commemorating successful seasons, championships and post-season appearances for all Saint Mary's sports hang on the back wall. At well-attended games, the court-level bleachers opposite the benches are reserved entirely for students.