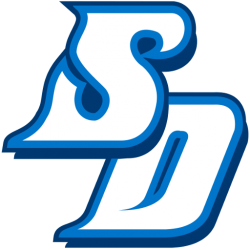 The San Diego Toreros men's basketball team is a college basketball team that represents the University of San Diego in San Diego, California. The school's team currently competes in the West Coast Conference (WCC). The team played in the NCAA Division I Men's Basketball Tournament in 2008. The Toreros play their home games in the Jenny Craig Pavilion, and their head coach is Sam Scholl.
They won their first WCC title in 1984, when the conference was known as the West Coast Athletic Conference. The team was led by all-conference forward Mike Whitmarsh, who was a runner-up that year for the conference player of the year award. Their coach, Jim Brovelli, was named the conference coach of the year. Jenny Craig Pavilion (JCP) is a 5,100 seat, multi-purpose arena, built in 2000 in San Diego, California, on the campus of the University of San Diego. It was named for weight-loss entrepreneur Jenny Craig. The Pavilion is sometimes affectionately known as the "Slim Gym", a punning reference to the weight-loss program founded by its namesake. It is the home of the University of San Diego Toreros men's and women's basketball and volleyball teams. Besides basketball, the Jenny Craig Pavilion is also used for many other campus and community events and concerts.
From 2001 to 2003, the arena was the site of the West Coast Conference men's basketball tournament, and hosted the tournament again in 2008.