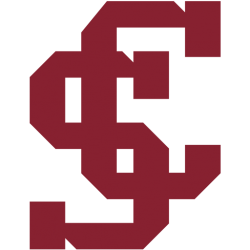 The Santa Clara Broncos men's basketball team represents Santa Clara University in NCAA Division I basketball competition. The team plays home games at the Leavey Center in Santa Clara, California and have been members of the West Coast Conference since its formation in 1952. The team is currently coached by Herb Sendek, who had previously been the head coach at NC State and Arizona State. Sendek was hired on March 29, 2016
Santa Clara has a long history of basketball success, having appeared in 11 NCAA Tournaments and 4 National Invitational Tournaments and producing a number of both collegiate All-Americans and NBA players. Recently, The 2010–11 team won the 2011 CollegeInsider.com Tournament and the 2012–13 team won the 2013 College Basketball Invitational. They are currently the only team to have won a CBI and a CIT.

Leavey Center, also known as the Leavey Activities Center or occasionally by its old nickname the Toso Pavilion, is Santa Clara University's indoor basketball arena in . It is home to the Santa Clara University Broncos Division I Basketball and Volleyball Teams. It has hosted the West Coast Conference men's basketball tournament ten times.
Leavey Center began life as the Harold J. Toso Pavilion, or Toso Pavilion constructed in 1975. The facility featured an air supported vinyl fabric roof supported by 11 large fans constantly producing a higher air pressure inside the dome than outside, similar to the Pontiac Silverdome or BC Place Stadium. The inside of the facility featured the main activity floor, two recreation areas, and team locker rooms. The roof developed several tears over the years and on April 4, 2000, the dome was deflated to make room for a more permanent roof structure to be built over the arena.