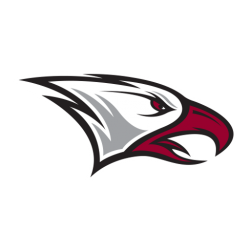 The North Carolina Central Eagles men's basketball team is the basketball team that represents North Carolina Central University, which is located in Durham, North Carolina, United States. The team currently competes in the Mid-Eastern Athletic Conference.
Prior to 2011, the Eagles competed in NCAA Division II and won the 1989 NCAA Men's Division II Basketball Championship. For much of the university's tenure in Division II, the school (formerly "North Carolina College") was a member of the Central Intercollegiate Athletic Association.
Two Eagles have been selected to the Naismith Memorial Basketball Hall of Fame:
Sam Jones - former NCCU player - inducted as a player in 1984.
John McClendon - former NCCU coach - inducted as a "contributor" in 1979, and as a coach in 2016