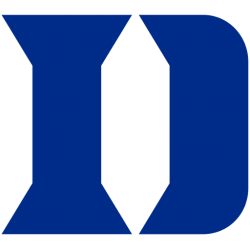 The Duke Blue Devils men's basketball team represents Duke University in NCAA Division I college basketball and competes in the Atlantic Coast Conference (ACC). The team is fourth all-time in wins of any NCAA men's basketball program, and is coached by Mike Krzyzewski.
Duke has won 5 NCAA Championships (tied with Indiana for fourth all-time behind UCLA, Kentucky and North Carolina) and appeared in 11 Championship Games (third all-time) and 16 Final Fours (fourth all-time behind North Carolina, UCLA, and Kentucky), and has an NCAA-best .755 NCAA tournament winning percentage.

Cameron Indoor Stadium is an indoor arena located on the campus of Duke University in Durham, North Carolina. The 9,314-seat facility is the primary indoor athletic venue for the Duke Blue Devils and serves as the home court for Duke men's and women's basketball and women's volleyball. It opened in January 1940 and was known as Duke Indoor Stadium until 1972, when it was named for Eddie Cameron, who served at Duke as men's basketball coach from 1928 to 1942, football coach from 1942 to 1945, and athletic director from 1951 to 1972. The arena is located adjacent to its predecessor, Card Gymnasium, which opened in 1930