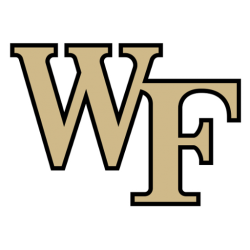 The Wake Forest Demon Deacons men's basketball team represents Wake Forest University in NCAA Division I college basketball and competes in the Atlantic Coast Conference (ACC). Wake Forest made the Final Four in 1962 and through the years, the program has produced many NBA players. The Demon Deacons have won the Atlantic Coast Conference tournament four times, in 1961, 1962, 1995, and 1996. Wake Forest's biggest rivalries are with the North Carolina Tar Heels, the Duke Blue Devils and the NC State Wolfpack. The most recent coach is Danny Manning, who was hired on April 4, 2014.

The Lawrence Joel Veterans Memorial Coliseum (also known as LJVM Coliseum, Joel Coliseum or simply The Joel) is a 14,407-seat multi-purpose arena, in Winston-Salem, North Carolina. Construction on the arena began on April 23, 1987 and it opened on August 28, 1989. It was named after Lawrence Joel, an Army medic from Winston-Salem who was awarded the Medal of Honor in 1967 for action in Vietnam on November 8, 1965. The memorial was designed by James Ford in New York, and includes the poem "The Fallen" engraved on an interior wall. It is home to the Wake Forest University Demon Deacons men's basketball and women's basketball teams, and is adjacent to the Dixie Classic Fairgrounds. The arena replaced the old Winston-Salem Memorial Coliseum, which was torn down for the LJVM Coliseum's construction.