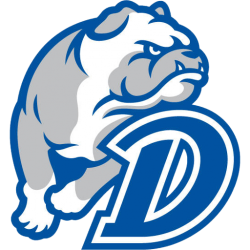 The Drake Bulldogs men's basketball team represents Drake University, located in Des Moines, Iowa, in NCAA Division I basketball competition and is coached by Darian DeVries. The program is best known for making the 1969 Final Four. They are the Des Moines Home Town Team.
The first season Drake fielded a men's basketball team was 1906–07. The Bulldogs finished with a 2–1 record as an independent. The next year during the 1907–08 season they were charter members of the Missouri Valley Conference.
The 1960s through mid-1980s saw some of the all-time great Drake teams. The Bulldogs were in the national rankings on a regular basis and the MVC was one of the premier conferences in men's basketball. Drake had fourteen winning seasons during this time.

The Knapp Center is a 7,152-seat multi-purpose arena on the campus of Drake University in Des Moines, Iowa, United States. It was built in 1992.
The Knapp Center is the center building for three athletic buildings combined together. The Bell Center to the west is a general athletic building with offices, a pool, gym, and locker rooms. To the east is the Shivers' Basketball Practice facility, which opened in 2014.