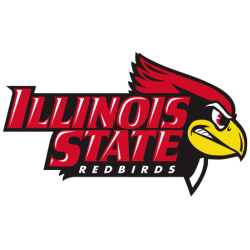 The Illinois State Redbirds men's basketball team represents Illinois State University, located in Normal, Illinois, in NCAA Division I basketball competition. They are currently led by head coach Dan Muller and play their home games at Redbird Arena as a member of the Missouri Valley Conference. They have the national distinction of earning the most National Invitation Tournament berths (14) without making the semifinals, and also have the longest NCAA Tournament drought (21 years and counting) in the Missouri Valley Conference.

Redbird Arena is a 10,200-seat multi-purpose arena located in Normal, Illinois, on the campus of Illinois State University. Built in 1989, the building is notable for its use of a Teflon-coated roof that gives off a "glow" during night events. Three Illinois State Redbirds athletic teams use the facility as their home court: men's basketball, women's basketball, and women's volleyball.