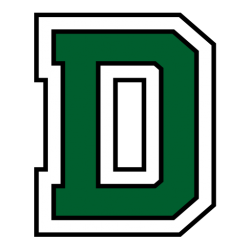 The Dartmouth Big Green men's basketball team is the basketball team that represents Dartmouth College in Hanover, New Hampshire, United States. The school's team currently competes in the Ivy League.
The Big Green have appeared in the NCAA Tournament seven times with two national championship game appearances. Their combined record is 10–7. The Big Green have not had a winning record since going 14-12 in the 1998-99 season.

Edward Leede Arena is a 2,100-seat, multi-purpose arena in Hanover, New Hampshire. Built in 1986, it is home to the Dartmouth College Big Green basketball team. It is located within the John W. Berry Sports Center, which includes Leede Arena; two additional regulation basketball courts; a 4,500-square boxing gym and fencing room; four varsity locker rooms; squash and racquetball courts, and the athletic ticket office. The arena was named in honor Edward Leede, class of 1949, one of the school's leading basketball scorers, and was built to replace the old Alumni Gym, next door to the sports center. It was built on the site of Davis Rink, the original ice hockey arena from 1929 to 1975.