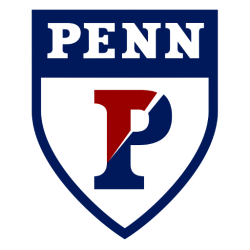 The Palestra, often called the Cathedral of College Basketball, is a historic arena and the home gym of the Penn Quakers men's and women's basketball teams, volleyball teams, wrestling team, and Philadelphia Big 5 basketball. Located at 235 South 33rd St. in Philadelphia, Pennsylvania on the campus of the University of Pennsylvania, near Franklin Field in the University City section of Philadelphia, it opened on January 1, 1927. The Palestra has been called "the most important building in the history of college basketball" and "changed the entire history of the sport for which it was built."
The arena originally seated about 10,000, but now seats 8,725 for basketball. The Palestra is famed for its close-to-the-court seating with the bleachers ending at the floor with no barrier to separate the fans from the game.