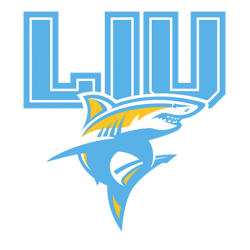 The LIU Sharks are the result of the July 1, 2019 unification of the athletic departments which had previously represented two separate campuses of LIU, the Division I LIU Brooklyn Blackbirds and the Division II LIU Post Pioneers
The LIU Sharks men's basketball team represents Long Island University in NCAA Division I basketball competition. They play their home games at their Brooklyn Campus in the Steinberg Wellness Center, formerly known as the Wellness, Recreation & Athletics Center, and are members of the Northeast Conference. Their current head coach is Derek Kellogg who was hired after his firing from Massachusetts in 2017.

The Steinberg Wellness Center, formally known as the Wellness, Recreation and Athletic Center (WRAC), is a 2,500-seat multi-purpose arena in Brooklyn, New York. It was built in 2006 and is home to the LIU Sharks Men's and Women's Basketball, Women's Volleyball, Women's Fencing, Women's Swimming & Diving and Women's Water Polo teams. LIU previously played their home games at the Schwartz Athletic Center. Following President David Steinberg's retirement in Spring 2013, the WRAC was renamed the Steinberg Wellness Center to honor his 27-year tenure as President.