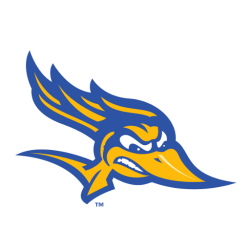 The Cal State Bakersfield Roadrunners men's basketball represents California State University, Bakersfield in Bakersfield, California, United States. The team is currently led by head coach Rod Barnes and competes in the Western Athletic Conference, and will be leaving for the Big West Conference in 2020.
The Roadrunners joined NCAA Division I in 2007. During their time in NCAA Division II they participated in 21 NCAA Division II Tournaments. They advanced to the final four eight times and are three time national champions (1993, 1994, 1997). They won the Western Athletic Conference Tournament in 2016 earning their first bid to the NCAA Division I men's basketball tournament.

Icardo Center is a 3,497-seat multi-purpose arena in Bakersfield, California. It is home to the Cal State Bakersfield Roadrunners men's basketball, women's basketball, women's volleyball and wrestling teams. From the 1998-99 season through the 2013-14 season, the basketball teams played all or some of their games are in nearby Rabobank Arena, but the teams moved back to campus exclusively starting in the 2014-15 season.