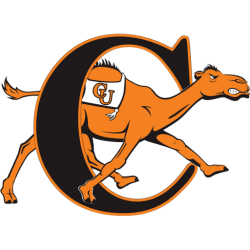 The Campbell Fighting Camels basketball team is the men's basketball team that represent the Campbell University in Buies Creek, North Carolina. The school's team currently competes in the Big South Conference. The team's most recent appearance in the NCAA Division I Men's Basketball Tournament was in 1992. After struggling for several seasons, the Fighting Camels finally broke through in the 2009–2010 season. Campbell tied for first in the regular season Atlantic Sun standings. However, their bid for an NCAA Tournament bid came up short, as they were eliminated in the Atlantic Sun Conference Tournament.

The John W. Pope Jr. Convocation Center is a multi-purpose arena in Buies Creek, North Carolina. The arena, Gore Arena, is located on the campus of Campbell University and hosts the university's basketball, volleyball, and wrestling programs.
The Pope Convocation Center played host to the 2016 Big South Conference Men's Basketball Tournament, taking place March 3–6 of that year. It will once again host the quarterfinal and semifinals of the conference tournament in 2019.