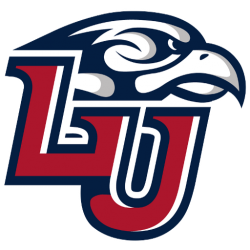 The Liberty Flames men's basketball team is the men's basketball team that represents Liberty University, one of the largest Christian universities in the world. They play their home games at the Vines Center and are members of the Atlantic Sun Conference, having moved there in July 2018 after 27 seasons in the Big South. Liberty has reached post-season 4 times in its NCAA Division I history.

The Vines Convocation Center (or The Vines Center) is a 9,547-seat multi-purpose arena in Lynchburg, Virginia. It was built in 1990 and is home to the Liberty University Flames (men's) and Lady Flames (women's) basketball teams. The Vines Center features three practice courts (1.5 each for men’s and women’s basketball), four spacious locker rooms, a weight room, a training room, men’s and women’s basketball team rooms, a team dining room, basketball coaches offices, a built-in TV studio, a center-hung scoreboard and a suite atop the seating bowl. It hosted the Big South Conference men's basketball tournament from 1995 to 1998, and also all rounds of the tourney except for the first round in 2003 and 2004.