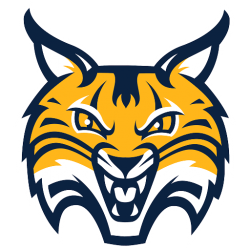 The Quinnipiac Bobcats men's basketball team represents Quinnipiac University in Hamden, Connecticut, United States. The school's team currently competes in the Metro Atlantic Athletic Conference. They are currently coached by Baker Dunleavy, formerly the associate head coach at Villanova, and play their home games at the TD Bank Sports Center.
Joe DeSantis was the fifth head coach in Quinnipiac history. He led the Bobcats during their transition from Division II to Division I. DeSantis's best season was in 1999–2000 when the team went 18–10 and DeSantis won NEC Coach of The Year. On March 8, 2007.
The Bobcats have appeared in three NCAA Division II Tournaments. Their combined record is 0–6.

People's United Center, previously known as TD Bank Sports Center, is a multi-purpose arena in Hamden, Connecticut. Its design is unusual in that it consists of two separate playing and seating areas, one intended for basketball and one intended for ice hockey, joined together within a common facility. It seats 3,570 for basketball and 3,386 for hockey. Officially, the hockey side is known as the Frank Perrotti, Jr. Arena at the People's United Center.
The center cost $52 million to build. Its creation is part of an ambitious plan by Quinnipiac to improve its drawing power for student athletes.