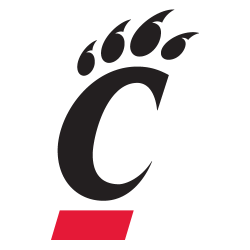 The Cincinnati Bearcats men's basketball program represents the University of Cincinnati in Cincinnati, Ohio. The school's team competes in NCAA Division I as part of the American Athletic Conference.
With over 1800 all-time wins, the Bearcats are one of the 15 winningest basketball programs of all-time. The school's merits include 2 National Titles, 6 Final Fours, and 33 NCAA Division I Men's Basketball Tournament appearances. As of 2019, Cincinnati has appeared in 9 consecutive NCAA Tournaments, and 23 of the last 28, with an all-time tournament record of 46–32. There have also been 42 All-American honors issued to Bearcats as well, while 34 have gone on to play in the NBA (4 were active as of the 2018-19 NBA season).

Fifth Third Arena is a 12,012-seat basketball arena in Cincinnati, Ohio, United States. The number of seats in the arena was reduced from the initial 13,176 seat design to 12,012 in honor of the number 12 jersey of Hall of Famer Oscar Robertson. The arena opened in 1989 and is located on the campus of the University of Cincinnati. It primarily serves as the home venue for the Cincinnati Bearcats men's basketball, women's basketball, and women's volleyball teams and hosts other events. It is located in the Myrl H. Shoemaker Center, which was also the name of the arena until 2005, when it was named for Cincinnati-based Fifth Third Bank).