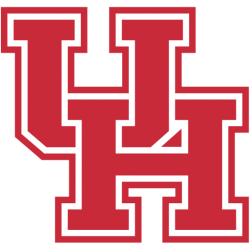 The Houston Cougars men's basketball team represents the University of Houston in Houston, Texas, in the NCAA Division I men's basketball competition. The university is a member of the American Athletic Conference. The team last played in the NCAA Division I Men's Basketball Tournament in 2019 and is tied for 15th in number of Final Four appearances.
Although the University of Houston already had a women's basketball program, the Houston Cougars men's basketball program did not begin until the 1945–46 season. Alden Pasche was the team's first head coach. In their first two seasons, the Cougars won Lone Star Conference regular-season titles and qualified for postseason play in the NAIA Men's Basketball tournaments in 1946 and 1947. The Cougars had an all-time NAIA tournament record of 2–2 in two years.

The Fertitta Center, formerly known as Hofheinz Pavilion, is a 7,100-seat multi-purpose arena on the University of Houston campus in Houston. Located at 3875 Holman Street, it is home to the Houston Cougars men's and women's basketball teams and the women's volleyball team. Previously, the arena was opened in 1967 as Hofheinz Pavilion, named after Roy Hofheinz and his late wife, Irene Cafcalas "Dene" Hofheinz, after they donated $1.5 million to help fund construction. Roy Hofheinz, known as Judge Hofheinz, was a UH alumnus and a Houston politician, businessman, and philanthropist. The arena is now named after restaurant magnate and UH alum Tilman Fertitta, who donated $20 million toward the complete renovation of the arena in 2016. The court is named for hall of fame and former Cougars coach Guy V. Lewis. The arena also contains an alcove dedicated to Basketball Hall of Famer Elvin Hayes, a Cougar player in the 1960s and NBA star in the 1970s. Like many arenas of its kind, the seating bowl of Fertitta Center is dug into the ground so that one enters the building at the top of the bowl.