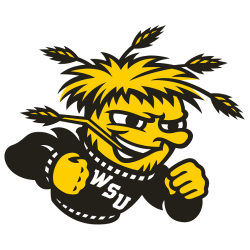 The Wichita State Shockers men's basketball team is the NCAA Division I college basketball program representing Wichita State University in Wichita, Kansas.
The Shockers have made 14 appearances in the NCAA Tournament, reaching the Final Four twice, the Elite 8 four times, and the Sweet 16 six times. The team plays its home games at Charles Koch Arena, where it averaged 10,391 fans per game in 2012, ranking 38th nationally.
Wichita State, then known as Fairmount College, first took the court in 1906 under head coach Willis Bates. During this time, the sports teams were known as the "Wheatshockers". The first official game was held in the basement of Fairmount Hall. Fairmount lost to Washburn University by a score of 37–10. During this inaugural season, the Wheatshockers only won two games.

Charles Koch Arena is a 10,506-seat multi-purpose arena in Wichita, Kansas, United States. It is located on the southeast corner of 21st and Hillside on the campus of Wichita State University in northeast Wichita. The arena is home of the Wichita State Shockers men's basketball, women's basketball, and women's volleyball teams.
The arena was originally built in 1953 as the University of Wichita Field House by what was then the Municipal University of Wichita. It was considered several years ahead of its time because of its circular design, which gave nearly every fan a clear sight line and put the seats very close to the action. As a result, it was quickly nicknamed "The Roundhouse," a name that has stuck to this day. When Wichita joined the state university system in 1964, the arena was renamed the WSU Field House.