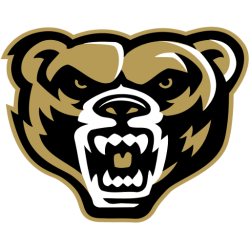 The Oakland Golden Grizzlies are the men's basketball team that represent Oakland University in Auburn Hills, Michigan, United States. The school's team competes in the Horizon League and plays their home games at the Athletics Center O'rena. The Golden Grizzlies are coached by Greg Kampe. Kampe is the third longest-tenured Division I head coach, behind Jim Boeheim and Mike Krzyzewski. Oakland last played in the NCAA Division I Men's Basketball Tournament in 2011.
Through the 2019–2020 season, Oakland has made a three-point field goal in 1,003 consecutive games, the fifth-longest active NCAA Division I streak. They last finished a game without a three-pointer on January 30, 1988.

Athletics Center O'rena is a 4,000-seat multi-purpose arena in Auburn Hills, Michigan. It is home to the Oakland University Golden Grizzlies men's basketball, women's basketball and volleyball teams. The court has a distinctive "blacktop" color first used in the 2015–16 season.
The facility opened November 17, 1998, with a 96–66 loss to Michigan State University in men's basketball. The opening of the O'rena coincided with Oakland's move from Division II of the National Collegiate Athletic Association (NCAA) to Division I.
The O'rena attendance record is 4,123, set January 13, 2017, against the University of Detroit Mercy.