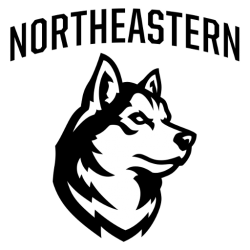 The Northeastern Huskies men's basketball team represents Northeastern University, located in Boston, Massachusetts, in NCAA Division I basketball competition. The team has competed in the Colonial Athletic Association since 2005 and has won two tournament titles, having previously played in the America East Conference, where they won seven tournament titles. The Huskies currently play home games at the 6,000-seat Matthews Arena. Since 2006, the Huskies have been coached by Bill Coen.

Matthews Arena (formerly Boston Arena) is a multi-purpose arena in Boston, Massachusetts. It is both the oldest arena still in use for ice hockey and the oldest multi-purpose athletic building still in use in the world.
It opened in 1910 on what is now the east end of Northeastern University's campus, and is currently owned by the university. It is the original home of the National Hockey League (NHL) Boston Bruins — the only team of the NHL's Original Six whose original home arena still exists for the sport of ice hockey at any level of competition — and the WHA New England Whalers (now the NHL Carolina Hurricanes), as well as the secondary home of the NBA Boston Celtics.
Today, Matthews Arena is home to the Northeastern Huskies men's and women's ice hockey teams, and men's basketball team as well as various high school ice hockey programs in the city of Boston.