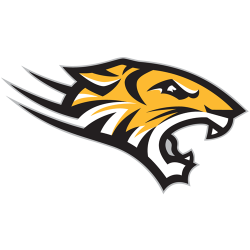 The Tigers represent Towson University in Towson, Maryland in NCAA Division I competition. The school's team currently competes in the Colonial Athletic Association and play their home games at SECU Arena.

SECU Arena is a 5,200-seat multi-purpose arena on the Towson University campus in Towson, Maryland. The arena was completed and opened in 2013, and now hosts the men's and women's basketball teams, as well as the volleyball and gymnastics teams. It replaced the Towson Center, which had been in use since 1976. The arena has 340 club seats, four private suites and 104 court side seats.
In addition to being the home of several Towson sports teams, the arena also serves several other functions. It has been used as a concert arena for artists such as the Backstreet Boys, Gavin DeGraw, and Juicy J. Since opening, the arena has been host to an annual performance by the Harlem Globetrotters. Additionally, both the university and local Baltimore County high schools use the facility for their commencement ceremonies.