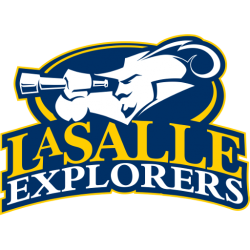 The La Salle Explorers men's basketball program represents La Salle University in college basketball.
The program has been rated the 53rd "Greatest College Basketball Program of All-Time" by Street & Smith's magazine and 71st by the ESPN College Basketball Encyclopedia.
La Salle has won one National Championship, one National Invitation Tournament Championship, and advanced to two Final Fours. The Explorers have also made 12 NCAA Tournament appearances, won eight Philadelphia Big 5 city championships, and four Metro Atlantic Athletic Conference Championships. The program is one of only two schools (with Houston) to have two players in the top 25 in all-time NCAA scoring – Lionel Simmons and Michael Brooks. It's also had three National Players of the Year.
The Explorers have appeared in the NCAA Tournament 12 times. Their combined record is 14–11. They were National Champions in 1954.

Tom Gola Arena, The Tom, The Gola, is a 3,400-seat multi-purpose arena in Philadelphia, Pennsylvania situated inside the Trumark Financial Center. It is home to the La Salle University Explorers basketball and volleyball teams. It is named after Tom Gola, a Philadelphia basketball player and coach who is in the Naismith Memorial Basketball Hall of Fame.