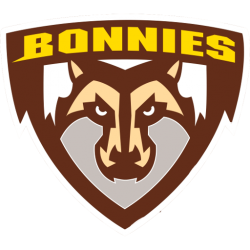 The St. Bonaventure Bonnies men's basketball (formerly the St. Bonaventure Brown Indians) team is the college basketball team that represents St. Bonaventure University in St. Bonaventure, New York, United States. The school's team currently competes in the Atlantic 10 Conference and plays its home games at the Reilly Center. The "Bonnies" are currently coached by all-time coaching wins leader Mark Schmidt, who during his 12th season surpassed former coach Larry Weise with his 203rd victory.
Of the major sports at St. Bonaventure, basketball was the last introduced. In 1902, the first team had been put together, mainly consisting of former football players. The coach of this team was university professor Patric Driscoll. Official records of these games were not kept. Proper facilities were not available until four years later when intramural games began to be played in a handball court on campus.

Reilly Center, previously known as University Center, is a 5,480-seat multi-purpose arena, in St. Bonaventure, New York, United States. It is home to the St. Bonaventure University Bonnies men's and women's basketball teams. The arena opened in 1966 and is named for Carroll "Mike" Reilly, who coached both varsity football and basketball at the university.
In 2007, the playing surface was named "Bob Lanier Court" in honor of former Bonnies and NBA great Bob Lanier, who led the Bonnies to the Final Four in 1970.
It is the third-largest basketball arena in Western New York (behind the over 18,000 seats in KeyBank Center and the 6,100 seats in Alumni Arena at the University at Buffalo North Campus) and has the highest seating capacity of any sports venue in Cattaraugus County and the western Southern Tier.