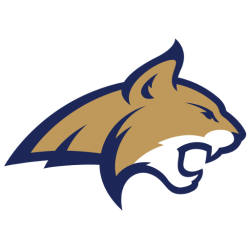 The Montana State Bobcats men's basketball team represents Montana State University in Bozeman, Montana, United States. The school's team currently competes in the Big Sky Conference. They play their home games at Brick Breeden Fieldhouse.
Montana State began varsity intercollegiate competition in men's basketball in 1902. The Bobcats were retroactively recognized as the pre-NCAA Tournament national champion for the 1928–29 season by the Premo-Porretta Power Poll and the Helms Athletic Foundation.
The Bobcats have appeared in three NCAA Tournaments, with a combined record of 0–3.

The Brick Breeden Fieldhouse is a multi-purpose indoor arena located on the campus of Montana State University in Bozeman, Montana B. It is the home of the Montana State Bobcats of the Big Sky Conference; the primary venue for men's and women's basketball and indoor track and field.
The arena regularly has numerous tournaments, concerts, plays, speaking engagements, and trade shows throughout the year; it annually hosts the high school all-class state volleyball tournament and the MSU Spring Rodeo. The Big Sky men's basketball tournament finals were played here in 1988, 1996, and 2002, and the women's in 1993.