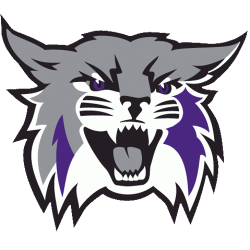 The Weber State Wildcats team is the basketball team representing Weber State University in Ogden, Utah. The program is classified in the NCAA Division I, and is a member of the Big Sky Conference. The team last played in the NCAA Division I Men's Basketball Tournament in 2016. The Wildcats are currently coached by Randy Rahe.
Street & Smith ranked Weber State 51st in its 2005 list of the 100 greatest college basketball programs of all time, while Jeff Sagarin placed the program 116th in his 2009 all-time rankings in the ESPN College Basketball Encyclopedia.
At .630, the Wildcats have the 27th highest winning percentage in Division I college basketball.

Dee Events Center is a multi-purpose indoor arena in the western United States, located in Ogden, Utah. The circular, 11,592-seat domed arena, similar in design to many of the era, opened 43 years ago in 1977 and was named for the Lawrence T. Dee family, for his extensive contributions in building the arena.
It is the largest arena in Utah north of Salt Lake City and is home to the Weber State University Wildcats men's and women's basketball teams. It was home to the women's volleyball team until 2006.