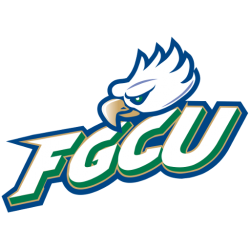 The Florida Gulf Coast Eagles men's basketball team is the men's basketball team that represents Florida Gulf Coast University in Fort Myers, Florida, United States. The school's team currently competes in the Atlantic Sun Conference.
The Eagles men's basketball team is best known for their run in the 2013 NCAA Men's Division I Basketball Tournament, their first since moving up to Division I. In the Round of 64, the Eagles defeated the #2 seed Georgetown 78–68. It was only the seventh time that a 15th seed has defeated a 2nd seed, and the second-highest margin of victory for one.
The Eagles have appeared in the NCAA Division I Tournament three times. Their combined record is 3–3. Their highest seed was #14 in 2017.

Alico Arena is a 120,000 sq ft multipurpose arena on the campus of Florida Gulf Coast University in Fort Myers, Florida. It is the home of the FGCU Eagles volleyball and men's and women's basketball teams. It holds 4,633 people in basketball configuration. It also features four practice courts, six suites, twelve locker rooms, and the offices of the Athletics Department.