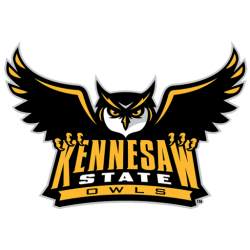 The Kennesaw State Owls men's basketball team represents Kennesaw State University in Kennesaw, Georgia, United States. The school's team currently competes in the Atlantic Sun Conference. They are currently led by head coach Amir Abdur-Rahim and play their home games at the KSU Convocation Center. During their time as a member of NCAA Division II, they were national champions in 2004.
Former four-year graduate guard Markeith Cummings (2009–13) is the team's all-time leading scorer
The Owls have appeared in three NCAA Division II Tournaments. Their record is 7–2. They were national champions in 2004.

The KSU Convocation Center is a multi-purpose arena on the campus of Kennesaw State University in Kennesaw, Georgia, United States. The arena has a listed seating capacity of 4,600 people and opened in 2005. It is home to the Kennesaw State Owls men's basketball, women's basketball, and women's volleyball teams as well as the administrative offices for the KSU athletic department. It is also available for other events and has hosted concerts, conferences, and trade shows, as well as sporting events.