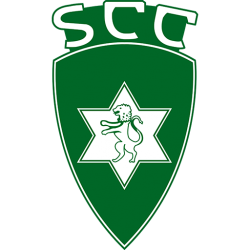 Sporting Clube da Covilhã, commonly known as just Sporting da Covilhã, is Portuguese football club from the city of Covilhã that plays in the second-tier LigaPro. The club was founded in 1923. Their nickname is the Leões da Serra, meaning "Lions of the Mountain Range," due to Covilhã's location in the Serra de Estrela, the highest mountains in Portugal.
Their home ground is Estádio Municipal José dos Santos Pinto, located at approximately 900 m of altitude. However, SCC play sometimes at a more recent Complexo Desportivo da Covilhã in Covilhã, which holds a capacity of 3,000 spectators. Their current chairman is José Oliveira Mendes and current manager is Fernando Chaló. They have won five Second Division in 1948, 1958, 1987 (second-tier), 2002, and 2005 (third-tier). The club is now in their sixth consecutive presence in the second tier.