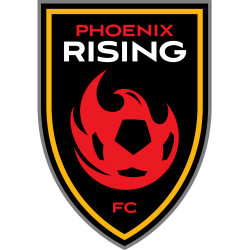 Phoenix Rising Football Club is an American professional soccer team based in Phoenix, Arizona. Founded in 2014 as Arizona United Soccer Club, the team is a member of the USL Championship, the second tier of the American soccer league system.

Casino Arizona Field, formerly known as Phoenix Rising Soccer Complex, is a 15.8-acre soccer-specific training and stadium facility located in the Salt River Pima–Maricopa Indian Community near Tempe, Arizona. It is the home of Phoenix Rising FC of the USL Championship. The complex has a 6,200-seat temporary stadium with luxury suites, separate training field, and parking area and is privately funded.

The first game at the complex was held on March 25, 2017, when Rising FC hosted Toronto FC II in front of a crowd of 6,890 fans. They won their first game at the stadium on April 8 by defeating LA Galaxy II 2–1. Luke Rooney scored both goals, the first one on a penalty kick. They were the first goals scored by the team in their new stadium.

Phoenix Rising FC is a candidate for Major League Soccer expansion. If the franchise is awarded, a permanent stadium will be constructed on the site.