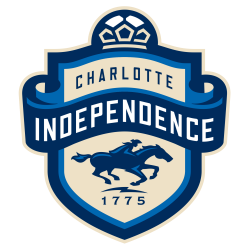 The Charlotte Independence were founded in 2014. They acquired the USL Pro franchise rights for Charlotte from the Charlotte Eagles, who moved into the amateur Premier Development League (PDL).

The Independence take their name from Mecklenburg Declaration of Independence. Their crest features the year 1775 (the year in which it was purported to have been signed) and a horse-mounted Captain James Jack, who is said to have carried the Declaration to Philadelphia. Supporters were asked to choose one of twelve designs; all 12 featured the year and Jack.

Former Dallas Burn head coach Mike Jeffries was hired as the Independence head coach on December 5, 2014. The team is nicknamed "The Jacks," in Jack's honor.

The Independence lost their first game to the Charleston Battery 3–2 on March 28, 2015 at Transamerica Field. Jack Thompson scored the team's first ever goal in the 13th minute.

The Sportsplex at Matthews is a large sports complex and park in Matthews, North Carolina, southeast of Charlotte, featuring 12 full-sized soccer fields anchored by a 2,300-seat stadium. The stadium currently seats 5,000 as it has been expanded using modular seating.

In 2018 bleacher seating was placed around Field 10 creating a smaller auxiliary stadium used by the Charlotte Independence as a training field and occasionally by the Charlotte Eagles and Lady Eagles for matches.

History
The idea of a sports complex along the outer-belt in Matthews was first proposed in the early 21st century with the official groundbreaking taking place on May 17, 2012 following years of delays due to the global 2007–2012 global financial crisis. Originally called the Matthews Sportsplex the name was changed during construction. Following a soft opening in 2015, the complex was completed in early 2017.

In August 2019 the stadium hosted the Charlotte Football Kickoff, a high school football double-header that had previously been played at American Legion Memorial Stadium in Charlotte.