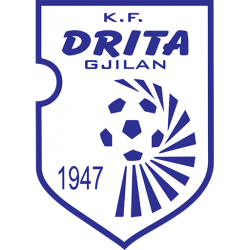 Football Club Drita (Albanian: Klubi Futbollistik Drita), commonly known as Drita, is a professional football club based in Gjilan, Kosovo. The club play in the Football Superleague of Kosovo .

The club's home ground is the Gjilan City Stadium. It was built in 1967 at time the club played within Yugoslav league system. However, from 1990 until the end of the Kosovo War, the club split in two different clubs with one team staying as the official club, playing in the home stadium and league system it completed, and another, formed by a group of rebel pro-Albanian independence players, forming a parallel club which started competing in the unrecognised Kosovar championship.

After the Kosovo War, it was the rebel team that took over the club facilities, including stadium, and has been playing since 1999 as the "official" Drita.

The Gjilan City Stadium (Albanian: Stadiumi i Qytetit të Gjilanit, Serbian: Градски стадион у Гњилану / Gradski stadion u Gnjilanu) is a soccer-specific stadium in Gjilan, Kosovo. It is currently used mostly for football matches and is the home ground of SC Gjilani and FC Drita of the Football Superleague of Kosovo. The stadium was completed in 1967 but since 2017 is in Re-Construction project. The stadium holds less than 15,000 people.