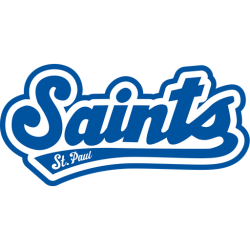 The St. Paul Saints are a Minor League Baseball team of the Triple-A East and the Triple-A affiliate of the Minnesota Twins. They are located in Saint Paul, Minnesota, and have played their home games at CHS Field since 2015. They previously played at Midway Stadium from 1993 to 2014.

From their founding in 1993 through 2020, the Saints were an independent baseball team with no affiliation with Major League Baseball (MLB). They played in the Northern League from 1993 to 2005 and the American Association of Independent Professional Baseball from 2006 to 2020. The Saints became an MLB-affiliated team in conjunction with the reorganization of the minors for the 2021 season.

Before the arrival of the Minnesota Twins in 1961, there was a long history of minor league baseball teams called the St. Paul Saints, as well as their crosstown rivals the Minneapolis Millers. One incarnation of the Saints participated in the Union Association, a short-lived major league, in 1884. A second incarnation was active in the Western League from 1894 to 1899, and became a forerunner of the modern Chicago White Sox. The third and most long-lived incarnation of the Saints was active in the American Association from 1915 to 1960.

CHS Field is a baseball park in downtown Saint Paul, Minnesota. It is home to the St. Paul Saints of the Triple-A East league of Minor League Baseball, as well as home to Hamline University's baseball team. With the Saints' affiliation to the Minnesota Twins, beginning in 2021, CHS Field is the smallest Triple-A ballpark in the Minors, and the closest (at a distance of 12.9 miles along surface streets and Interstate 94) to its tenant's parent MLB club.